I’m making a bit of a title revision:

10 Tips for Driving in the Rain from a Disgruntled East Coaster Who Just Wants to Get to the Grocery Store Without Injury.

Anyway. When I composed this in my head chugging along the freeway while those around me seemed to have no clue what rain even *was*, the post got pretty scathing.

I will try to tone it down for the sake of the Zen-ness I’m trying to pass along with these tips. No one goes to a bitch to learn how to be calm.

**Most importantly, if you do not feel comfortable driving in a particular weather situation, then do not drive. Not only is it dangerous for you, it is also dangerous for the rest of us minding our own beeswax.**

Although necessary in any driving scenario, paying attention in the rain is even more important. Things happen much faster, and fiddling with your stereo or seat incline will NOT help your response time. Don’t like the song on your playlist? Unless the “skip” button is right on your steering wheel, too bad. It’ll be over in three minutes. Did you drop your chapstick under the seat? Too bad. Get it later. Everything happens much faster when it’s raining, so be ready to respond, or the rain will respond all over you. And it won’t be pretty.

I’ll say it again: turn on your freaking lights. It’s much harder to see another vehicle through a wet haze, so chances are I will merge right into your face unless I saw your lights first. If you cannot see more than 5-10ft in front of you, turn on your hazard lights as well. This is why they exist: YOU ARE A HAZARD. LET PEOPLE KNOW. And I cannot stress the importance of your turn signal. Turn it on maybe 100ft before you would normally flip that sucker. Again: everything happens faster in the rain. Be a light in the darkness! Give people the opportunity to see you and to see what you’re doing. 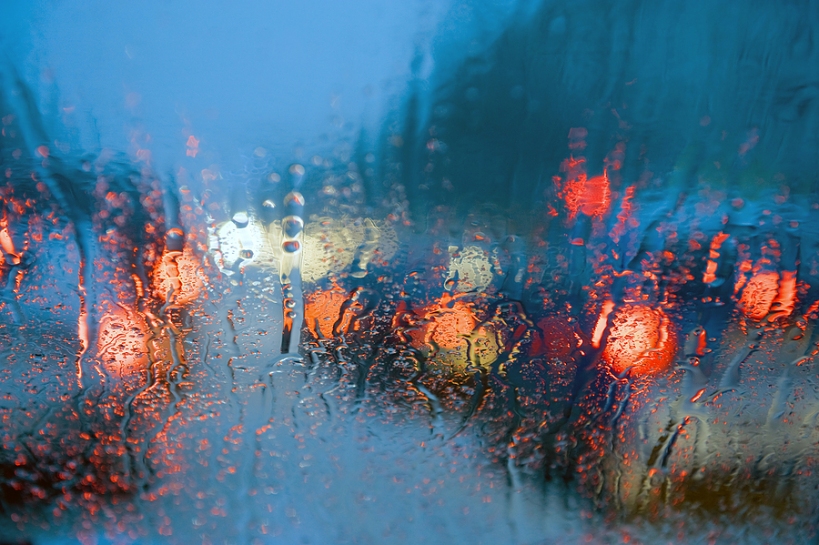 This is why lights are necessary.
http://www.addspacetoyourlife.com/wp-content/uploads/2010/01/Driving_in_rain.jpg

3. Adjust Your Speed for Gods Sakes

As a general rule of thumb, drive about 5mph slower in urban areas than you would normally drive, and *at least* 10mph slower on the freeway. It’s perfectly acceptable to be doing 40mph on the freeway in a good downpour. Sometimes I’ve seen people doing 20mph when it’s really pounding. Once again, everything happens faster in the rain (with the speed of catastrophe being proportional to the magnitude of the downpour), so slowing down just evens out the equation.

4. Use Your Brakes Early and Use Them Sparingly

Guess what? They don’t work as well on wet pavement. If you need to slow down, get your foot off the accelerator. If you really need to slow down, either for a turn or for impending traffic, start breaking early, and break gently. Let the car do its thing. Putting on your brakes if you’re not turning tells everyone around you, “OH MY GOD I’M GONNA CRASH INTO SHIT AND THE END IS NIGH!!” Braking means that there’s a car pileup in front of you, that someone is hydroplaning like a moron (more on How To Hydroplane later), or the earth split open and demons are shooting out. Just let the car do it’s thing. Chill.

5. Do Not Tailgate– And Not For the Reason You’re Thinking

Basically, if you drive even a “normal” distance behind the car in front, the water on the road will spray all over your windshield, making it even harder to see. If you back the fuck up, you’ll miss the spray and won’t have to run your windshield wipers on overdrive. If you’re tailgating them… just get off the road. Sometimes it’s raining so hard that even the setting labeled “Ping-Pong Ball On Speed” will just barely suffice, so avoid adding extra spray by being an impatient ass. 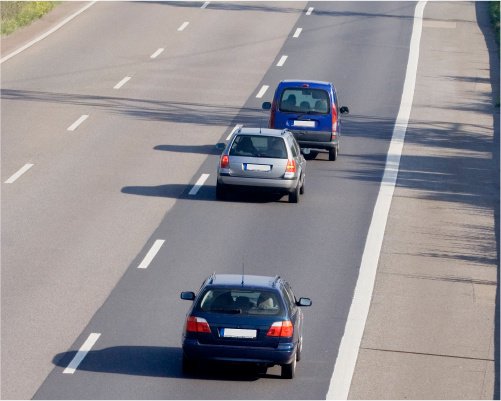 Back the fuck up.
https://seriousaccidents.com/articles/wp-content/uploads/2010/03/Tailgating.jpg

6. Go With the Car, Not Your Instincts, i.e. How To Hydroplane Like A Boss

Hydroplaning is when your car decides that it’s Jesus and starts driving *on top* of the water instead of through it. You have almost zero traction; braking is extremely ineffective. If you must brake, brake veeerrryyy slooowwwly and smoooootthhllyy. If you’re driving straight, hydroplaning is a little freaky, but the car will simply continue forward until it hits road again, and presto! you’re back in control. Trying to regain control by steering might cause a skid. If you’re skidding… no bueno. Just let the car do what its doing. If you’re in a turn when you begin to hydroplane… it gets tricky. DO NOT STEER AGAINST (i.e. try to correct) THE HYDROPLANE BECAUSE IT’S NOT GOING TO WORK. STEER IN THE DIRECTION OF THE SKID UNTIL YOU GET TRACTION AGAIN. Most likely you’ll be headed toward the outside bend of a turn. Hope you regain traction before you smack something. Of course, avoid hydroplaning if at all possible. But if you must hydroplane, go with the car: either let it continue straight or steer with the skid.

7. Stick to the Middle/Left of the Road

Generally speaking, a road slopes down toward the right (and fucks up the strides of runners everywhere.) If it’s a split roadway, it may slope down on both sides. Therefore, water will pool first at the edges of the road. Driving through a puddle will suck less if you’re in the shallower end. But if the water is up to the bottom of your doors or so, avoid the puddle! Your electrical system might throw a fit otherwise. If you have no choice, go slowly.

8. Remember to Use Your Defroster

If it’s raining, most likely the temperature difference will cause your windshield to start fogging up. Sometimes I’ll mistake that for just a bucketload of rain, but nope: that’s moisture on the inside of your windshield. Use the defroster (hot air with the A/C on to make sure the air is *dry* air and not *moist* air) to clear up the windshield. It does make a difference!

If you’re driving in the rain *and* in the dark, pay even more attention. Drive even more slowly. Brake even sooner. Give people even more room. Get that defroster going. For gods sakes use your lights. If everything happens faster in the rain, it happens like a greyhound on speed in the dark. 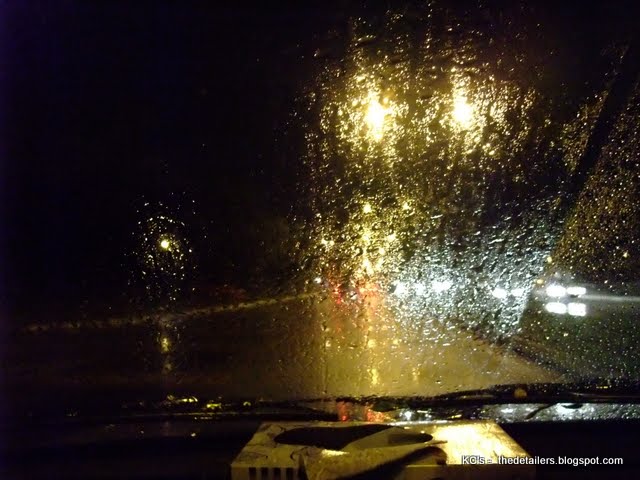 10. Know When to Pull Over–and How

There is no shame in pulling over! You did not fail the Rain Test by stopping at the filling station or chilling out on the shoulder of the freeway. When do you pull over? The minute you feel a bit panicked, when you feel like you *don’t* got this. Get outta the road. So, now what? Ideally, pull off into a parking lot or a gas station or rest stop… anywhere that parking is a thing. Otherwise, pull off onto the *right* shoulder as far as humanly possible and turn on your damned hazard lights because YOU ARE A HAZARD. Any driver uncomfortable on the road or anywhere close to the road is a hazard. Turn those lights on and wait until conditions are comfortable again.

In summary, one must be very Zen and very mindful about the whole driving-in-the-rain ordeal. Driving in the rain requires the very same skills.

Be present. Recognize obstacles as they arise and respond with grace and generosity.

Be generous. Let others pass or turn or whatever they will. Cutting someone off or speeding up to hold on to your spot in the traffic is just damned dangerous.

Be at ease. Panicked drivers are bad drivers. Know that you know what you’re doing.

Be self-aware. Know what you can handle and what you cannot. If the downpour is too much, accept that you ought not be driving and get off the road.

Be a light for others. … just turn on your freaking lights, especially your headlights and blinkers, and use your hazard lights when you’re pulled over or its raining like mad.

Really, applying these principles works in most life adventures: recognize the situation as its been given to you in the clearest manner, honor the needs of others while honoring your own, be a metaphorical (or literal) light for those around you, and just go with the flow.

For the Love of Metta,

P.S. “BUT WHAT THE HELL DO I DO IF LIGHTNING STRIKES MY CAR?!” This is unlikely, but it happens. When it does, the current travels around the *exterior* of the car (and sometimes through the electrical system) and down into the ground. No, your rubber tires don’t short out this whole process. And if you  have a fancy fiberglass car, you might be even more screwed, as it does not conduct the way that metal car frames will. Anyway, simply stay in the car, turn off the engine, and avoid touching anything metal, as a lot of metal objects inside the car (e.g. door handles, accelerator&brake, gearshift… it depends on the car). Touching the radio or your cell phone are also dubious endeavors, especially if either one is plugged into the car. It’s safe to get out when the current has passed into the ground completely. (But when is that?! Hard to say. To be safe, I’d suggest waiting out the storm.) Be sure to check the car afterwards: tires can blow out, things can ignite, electrical systems can be shot to shit… take care.