It’s been a while. Again.

But I had someone kindly request that I write on self-pity. (A request!! So exciting! My first one! Unless we count J suggesting I write a blog in the first place. But a specific request!!)

It’s not even a difficult topic: I pity myself. POOR ME. I SHOULD DIE IN A GUTTER BECAUSE MY LIFE IS SO TRAGIC AND I’M SO AWFUL. But really. I’ve already picked out the gutter.

One thing Jack Kornfield often says is this: “[we] become loyal to our suffering.”

Yup. That’s about right. I love my suffering. I wear it like a wedding ring: together forever ’til death do us part.

Something feels right and comforting when a new problem comes up, and then I can pity myself some more. I don’t mean to say that I get purposefully excited when shit goes down; shit goes down the same way for everyone: swirling endlessly down a toilet or dropping into a pre-existing pile. But rather, it’s familiar when something goes wrong. I know how to feel terrible. I know how to feel like everything is going to hell, like I’m just terrible and dysfunctional, and like Mama-I-don’t-want-to-die-but-sometimes-wish-I’d-never-been-born-at-all. I know Suffering. 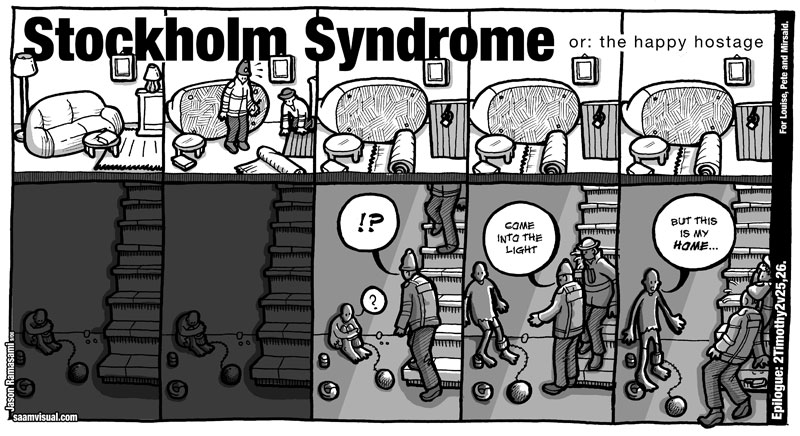 I guess it’s like a weird version of Stockholm Syndrome.

About a week ago, I went to a dharma talk with my favorite teacher. (I cried at least three times. Therefore, it was an excellent talk.) He had us do a surprisingly terrifying exercise, one he claimed would have us run screaming out of the building after ten minutes, but luckily we were only to do two.

We had to look into our neighbor’s eyes without speaking and without looking away.

AARGGGGHHH NO! NOT EYE CONTACT!!! (excuse me– the shy part of me couldn’t resist.) Anyway. At first it was terribly embarrassing, even with Jack narrating some ideas for us, directing the exercise. Here I was staring at This Guy I’d never met, whose name I didn’t know, and really looking at him. Who does that? It felt rude.

Then I started to see him a little bit. It wasn’t about me anymore. There was another consciousness sitting across from me. (What the fuck? That’s bizarre.) This Guy was real, too. He was born with the same depth of heart as I have. He’s been hurt, he’s lost people, he’s cried, he’s kept secrets from his loved ones, and he’s been afraid and ashamed. He’s also carried great dreams, great love, and moments of great joy. I could somehow see that sorrow and see that joy and see the scope of his experiences in his eyes. I didn’t know a single detail about what’s happened to him, about what he’s done and been and thought, but at the end of those two minutes, I knew him better than I’ve ever known anyone, my own mother included. And at the end of those two minutes, both of us were fighting back the tears that had begun to sting 90 seconds ago.

This is the closest photo I could find to that sense of knowing, and it’s barely close.
https://allaboutwordswa.files.wordpress.com/2014/07/old-man.png

I can’t tell you now what he looks like. I like to think I’d recognize him in the grocery store, but maybe not. I was looking into his eyes, not at his face.

So what does this ham-sandwich story have to do with self-pity? And did this experience transform my entire existence and free me? (No, it didn’t, by the way. But it builds on something I’ve been working on.)

I didn’t look at That Guy and the sadness in his eyes (mixed with happy of course) and pity him. I felt compassion, this rich feeling of love and care and well-wishing. And the way he was looking at me… there was no pity there. He saw me. And he had that look in his eyes a little bit like that old fellow above: he saw my sadness and the good bits of my heart, and he honored it all. It was compassion. I’ve only seen true, untainted compassion from three other people, therapists excluded. And they aren’t necessarily the people you’d expect.

So if I can look at a total stranger and feel real compassion–and he can feel it for me–in 2 minutes or less, why the hell can’t I feel it for myself, whom I’ve known longer than anyone? Why do I berate myself with words that I’d never say to someone else? Why do I tell myself that no one could possibly love me if they really knew me? Why do I drag myself through the mental gutter every single opportunity in every single day?

… and then I tell myself that I deserve the rudeness.

But That Guy doesn’t deserve me or anyone being rude to him if something goes wrong or he makes a mistake. He would never be rude to me. (Don’t ask me how I know, but I know.)

So I’m trying to learn how to treat myself like I’d treat someone else, like I’d treat That Guy. Instead of clinging to my suffering and pitying myself, I’d rather see myself with compassion and understanding. Rather than: “What even the fuck, this is awful. You deserve this. Wallow in the pain! Maybe even go find a real mud puddle and wallow in that, too, just for good measure,” maybe I can try to say: “Yes, this situation is a total shit-circus, and it really sucks that I have to be a part of this toilet of a performance. But this isn’t a reflection of me. I have a good heart, and I’ll try to act gracefully now and in the future.”

I’m not there yet. But… *sigh* I have a good heart. And I’ll try to act gracefully. Dammit.

For the Love of Metta,